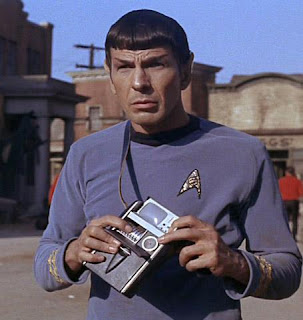 Science Fiction of yesterday sure overestimated us in most regards.  Here we are, well into the 21st Century.  No condos on the Moon.  No robot butlers.  No practical jet-packs.

But SciFi seriously underestimated the development of computer and communication technology.  Almost everyone these days is walking around with a device in their pocket that can outperform Mr. Spock's communicator and tricorder combined.  We've got broadband Internet, WiFi, cellular networks, hundreds of television channels via cable or satellite, etc.  People can communicate instantaneously with voice, text, images, and video to and from nearly everywhere.

This incredible, multi-layered grid of communications technology doesn't just happen though.  Like most of the Cornucopian world, it requires a constant flow of resources and perpetual skilled maintenance.  It is almost inevitable that these requirements will eventually fail to be met, and modern communications will collapse.

Those of us who remember living with telephone party lines and three channels of snowy over-the-air analog standard definition TV may not be quite as devastated at losing hundred megabit per second digital communication as the Millennials will be.  But we'll all need some alternatives as the Information Age breaks down. 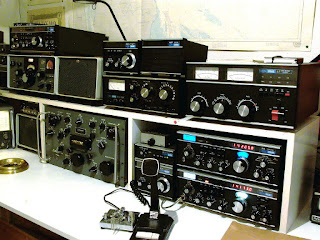 Amateur Radio covers a lot of ground.  It is relatively high-powered, long-range, two-way radio using many signal formats and bands, including shortwave, which can 'skip' very long distances.  Entry-level equipment starts at a few hundred dollars, but you can quickly get into thousands as an enthusiast.

In most countries, including the US, HAM Radio is regulated by law, and a license is required to broadcast.  The fact that Little Tin God bureaucrats think they own the electromagnetic spectrum, and that usually proud, nonconformist Preppers are oddly supportive of this notion has long baffled me.

HAM is one of those things that people get into mainly because they enjoy it as a hobby, then use prepping as a justification.  In practical terms, it is obsolete in today's era of layered global communications.  Ordinary events, like storms or earthquakes, may disable modern communications for a brief time on a local or regional basis.  But it would take a continental or global catastrophe to cause the final breakdown of modern communication networks.  When this happens, long-distance communications will become all but irrelevant anyway.    (A post-apocalyptic world is a localized world!)

There may be a period in the later stages of collapse, as current networks fail, but before we're all fully hunkered into place, when HAM Radio will prove invaluable.  But I expect that, by the time the Internet and telecom services go bye-bye, sending out long-range messages may not be the wisest of things for a doomsteader to be up to. 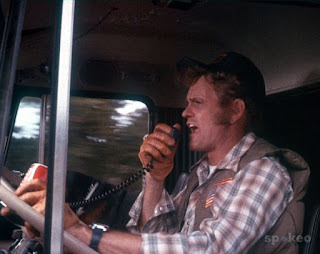 Citizen's Band Radio in America is a two-way, shortwave, usually AM, analog voice communication system.  Stock CB radios are low-powered (four watts) and short-range (around ten miles).  They come in automotive mount, home base station, and handheld form, and can still be purchased new for under $100.

CB was enormously popular for a time in the 1970s.  So much so, that, even when the number of channels was increased from twenty-three to forty in the later in the decade, you still had trouble getting a word in edgewise on any of them.  It didn't help that the AM analog signals were subject to static, fading, and bleed-over.  Plus, the potential for shortwave skip meant that users might be competing for a channel with signals coming-in from far outside normal range.  It was a glorious mess, but the only means the Average Joe had for mobile communication.

Today, CB is effectively obsolete.  We've got cellphones for mobile communication.  Internet forums for the semi-anonymous socializing that CB once provided.  Truckers still use CB, and, without the zillions of voices trying to use it all at the same time, it is easier to hail and talk with people these days than it was in the disco era.

CB originally required a license, but at the peak of the craze, the FCC gave up on any serious regulation and enforcement.  Enthusiasts routinely (and technically illegally) boost their CB radio transmitting power dramatically, using CB as a sort of redneck HAM Radio capable of interstate communication.  You can receive these souped-up signals with a stock radio, but you won't have the broadcasting power to reply.

Providence only knows how many million CB radios are laying around in attics, basements, and garages across America.  They are pretty easy to set-up and use.  As communications infrastructure crumbles, I'd be surprised if a great many of them weren't fished-out and put back into use.  Handy for maintaining contact with your neighbors, and perhaps making first contact with strangers from a safe distance.

1970s era kids' walkie-talkies usually operated on CB channel 14.  Their pathetic broadcast power makes them nearly useless for practical two-way communication.  (You can holler farther than they can transmit.)  But they can receive strong signals at long range. 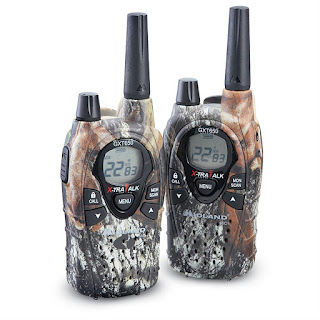 
The General Mobile Radio Service is a whole 'nother kettle of fish with pro-grade handhelds, vehicular mobiles,  base stations, repeater networks, etc.  Licenses are required to use it in the US, and many regulations apply.

But we're not interested in all that here.  (SEE DISCLAIMER AT THE BEGINNING OF THIS BOOK.)  Inexpensive bubble-pack GMRS walkie-talkies have long been available in America, and hardly anyone bothers with licensing.  There are new regulations on the manufacture and sale of these, but millions are already out there.

GMRS operates with frequency modulation (FM) on UHF bandwidth.  This tends to provide clearer voice communications with less static interference than old CB, with no need for long antennas.  The drawback is that GMRS signals don't bounce and skip like CB, so radio-opaque obstacles like hills and buildings can block transmission more easily.  Modern electronics allow pocket-sized, short antenna GMRS walkie-talkies to exceed the transmission power of stock CB radios, giving them five to ten miles of range.  (Never mind the advertised ranges.  Those are only going to happen with zero obstructions.)

The Family Radio Service is basically GMRS Junior.  It requires no license, but has fewer channels, and operates at lower wattage and range.  The modern equivalent of the Channel 14 CB walkie-talkies from the '70s.   Primarily used by kids.

The popular bubble-pack radios were usually GMRS/FRS hybrids.  This gave them twenty-two channels.  1-7 were shared by GMRS and FRS.  8-14 were FRS only.  15-22 were GMRS only.  Because 8-14 were strictly FRS, it was illegal to transmit at over half a watt on them (regardless of GMRS license), and most radios automatically switch to low power on those channels.  So using 8-14 could be handy if you don't want anyone picking up your signals beyond about one mile...  Channels 1-7 and 15-22 would broadcast at the full five watts unless you intentionally set them to low power.

At this writing, GMRS/FRS hybrids are still available new, but rule changes are supposed to end sales in late 2019.  After that, new FRS radios will be allowed to transmit at up to two watts on channels 1-7 and 15-22.  8-14 remain limited to half-watt.

GMRS gets eight new channels.  Supposed to be used for high-power repeaters.  Not much change in the radios, except they'll probably be explicitly labeled for licensed use only.  (And no one will care.) 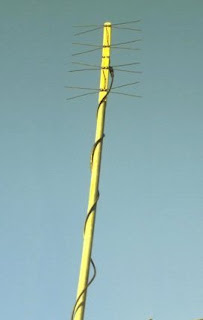 Those of us with a touch of gray remember the days before cable and/or satellite TV was considered the norm.  When most people got their TV programming through a simple antenna.

Some folks don't seem to realize that over-the-air antenna television broadcasting never ceased in America.  In fact, it got substantially better, with taller transmission towers, and more independent channels, which later formed the foundation for new networks.  Then came the digital transition, which added an array of digital subchannel programming to the mix.

All you need to get free programming over-the-air is a TV manufactured since roughly 2005 (or an older TV with a digital converter set-top box) and an antenna.  Contrary to advertising hype, it doesn't have to be a special "HD" or digital antenna.  The modern ATSC digital signals are broadcast on the same UHF / VHF radio bandwidth that American television has always used.  Plain old rabbit ears with UHF loop, or a rooftop antenna like Granny used, will work fine.

We use a home made antenna mounted on a mast.  We're out in the boonies, but on a hilltop, and get forty to fifty channels in decent weather.

We haven't had to pay for TV in over a decade.  Frees up money for beans, bullets, bandages, etc.

Since our signals come directly from the various stations' transmission towers, rather than from a central up-link like a satellite provider, antenna TV is a bit more bomb-proof. 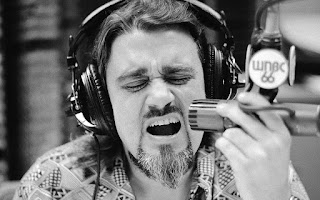 Listen-only radio became a revolutionary thing about a century ago, and it's still highly useful today.  The Clear Station blowtorch AM stations that blast news, weather, and more across large swaths of the American continent (especially at night) will probably be the last vestiges of modern communication technology to go silent, and they require the simplest of equipment to tune-in. 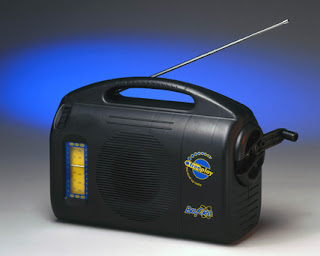 There are a ton of off-grid "emergency" radios on the market now, powered by crank handles and solar panels.  Most of them use a hand crank to turn a dynamo that charges a battery which powers the radio.  Problem is that the rechargeable battery is the weakest link in this set-up, and may go bad from either frequent use, or extended storage!

There have been clockwork radios in which the crank winds a spring which turns the dynamo to power the radio directly with no battery involved.  The BayGen Freeplay was to best-known of these, and their spring-driven radios are still available on eBay.  But the company has gone to the cheaper, battery-powered design with their new models.  So shop carefully. 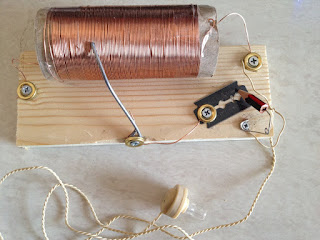 There is a way to get AM radio without any power source at all.  The simplest form of radio receiver there is still works, and can be assembled from widely available components.  In fact, people have put them together without any proper electronic parts at all.  (Known as "foxhole radios".)

Crystal radios do require a fairly strong signal, a large antenna, and a ground, making them immobile while in use.  They also produce only low-volume audio, best listened to with an earbud.

If you really want to have the ultimate in primitive wireless two-way wireless communications, you can learn Morse Code and pair your crystal radios with equally simple to fabricate spark-gap transmitters. 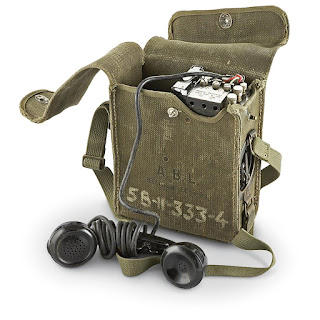 A simple way to maintain communication between people in fixed positions not too many miles apart is to run a simple telephone line.  (Or re-purpose existing land lines that have become defunct.)  Telephone communications are reliable, resistant to interference, require relatively little power, are difficult to intercept, and even more difficult to intercept without being detected.

The military has been using self-powered Field Telephones since the late 19th Century, and used military models are widely available at a reasonable price online.  Ordinary land line phones can be modified (mostly involves adding a battery) pretty easily. 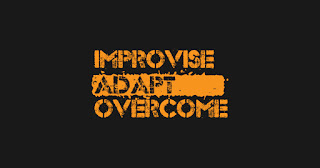 Coping with collapse and disasters can take a bit of jury-rigging.

Hurricane Hugo caught us without a decent battery radio, so I dug out an old car stereo, speakers, rigged a wire antenna, mounted the whole thing to a plastic milk crate, and powered it with lantern batteries wired in series.

With just a little understanding of basic electrical circuitry, it should be possible to cobble together functional, if primitive, communication networks from materials and parts available. 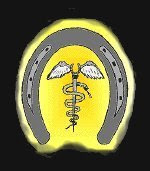